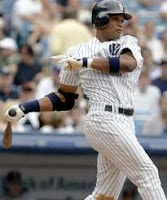 These days, everyone is writing and talking about Derek Jeter.
Every column is about how much green and time he will be contracted.
No doubt, the future Hall of Famer will retire as a member of the Bronx Bombers.
Jeter, 36, will be in Yankee Stadium when he will get his 3,000th career hit, among other offensive records.
This is all the news seems to be about.
Oh yeah, more articles are also about the other three members of the Yankees’ core four: Andy Pettitte, Jorge Posada and Mariano Rivera.
What about Robinson Cano?
Cano, 28, may be quieter in the media, but he was the Yankees’ MVP this past season.
The second baseman, a native of the Dominican Republic, was the team leader in batting average, hits, doubles and slugging percentage.
Cano was second in RBI and tied for third in home runs.
The two-time All-Star's offensive numbers were so great this season, he is up against Miguel Cabrera and Josh Hamilton for the 2010 American League Most Valuable Player Award.
He was distinguished among the very best last week, when he was honored with his second consecutive American League Silver Slugger Award, and his first American League Gold Glove Award.
No doubt, Robinson Cano is the man deserving the headlines right now.
Posted by Tony Menendez at 5:47 PM